Part of Something Big

Last night was the 2015 Celebration of Mundelein Seminary, bringing together everyone who makes the work of the seminary possible. The seminarians arrived early at the Sheraton Hotel, fighting their way through the Chicago traffic earning some of them less time in purgatory. Archbishop Cupich then arrived, easily mingling in the crowd and generously offering himself for selfies with the guests. Then the bells rang, and the night began.

Bishop Rojas and Cheri and Lawrence Klock were this year’s awardees, respectively receiving the Joseph Cardinal Bernardin “As Those Who Serve” Award and the Francis Cardinal George “Christo Gloria” Award. Fr. Barron introduced Bishop Rojas as the best theologically trained bishop in the country – because he taught him! The bishop talked about his experience as an immigrant and his experience ministering to immigrants, calling on everyone to reach out and help them make this home.

Archbishop Cupich graciously introduced Cheri and Lawarence Klock. He stressed the need we all have to be part of something big. After his installation as the Archbishop of Chicago, he asked his little nephew what he liked most about Chicago. His nephew said that he liked how big it was, especially the skyscrapers. His nephew liked that because he was part of something big. The Archbishop said that everyone has this need. But when he turned the microphone over to Cheri Klock, we were all amazed to hear how big she thinks the seminary’s mission is. She asked all to be part of this great mission. It could not have been said better! 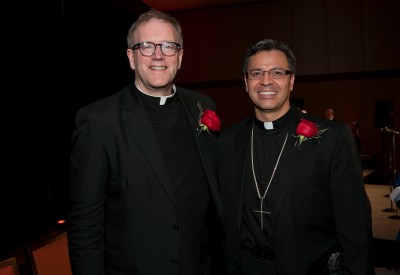 Mrs. Klock spoke of the absolute need to support the seminary since it is where priests are formed to bring you Christ. What is more important than that? A priest is mightier than the angels since through him God comes to man. St. Teresa of Avila said that she kisses the ground a priest walks on. Mrs. Klock drew the right conclusion: Mundelein is sacred ground! She also talked about her noble task of adopting a seminarian in prayer. She encouraged everyone to do this, for only through prayer will vocations blossom. Prayer is the wellspring of the Church. We could not have asked for a better talk about the importance of the seminary and priesthood for the world. 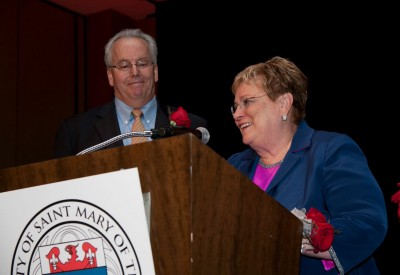 Mr. Klock joked that when he heard he received the award he could think of many reasons why he would receive it but he couldn’t understand why his wife Cheri would be awarded. He was obviously joking, given that his wife has helped the seminary and the seminarians in countless ways. Mr. Klock gave a stunning endorsement of Fr. Barron as rector of the seminary, calling Fr. Barron “the walking definition.” We thank Mr. Klock for his generous support.