The John Paul II Chapel has many beautiful stained glass windows depicting the lives of the saints who particularly touched John Paul II. One of the reasons Fr. Barron had the windows of the saints focus on moments of witness was that he wants the seminarians to see such witness and be inspired to imitate each saint’s Christocentric love in their lives. While the windows are great, I recently watched a Polish movie about St. Maximillian Kolbe that brought me to tears. It is the motion picture version of the Kolbe stained glass window in the John Paul II Chapel.

My wife is from Poland, and she has immersed me in Polish culture. Understanding and speaking Polish is not easy, so I mainly learn through pierogis and movies. Growing up in America, I thought American cinema was the epicenter of film. Isn’t the Academy Award the pinnacle award for filmmakers? Too lazy to read subtitles, I never watched many foreign films. I also was too impatient to sit through films with character development and a dramatic plot. However, through the insistence of my wife I have begun watching Polish films, and I am tending to think the genius for film resides there. In fact, Martin Scorsese  agrees.

Last week we watched a movie that I dismissed before watching. It is called Life for Life (Zycie za Zycie) by the philosophical Polish director Krzysztof  Zanussi (An Interview with Zanussi). I thought that the movie might be well-intentioned in presenting the life of this great saint, but I thought it wouldn’t be a good film as such. I do not know why but I have a knee-jerk reaction to movies about saints since many are poorly done. However, I was dead wrong about Zanussi’s movie. It turned out to be one of the best films I have ever seen. It is about Auschwitz and the martyrdom of St. Maximillian Kolbe. It centers around Jan Tycz, an Auschwitz prisoner (played by the great Christoph Waltz who played one of the most memorable villains in recent cinema in Tarantino’s Inglorious Bastards), who escapes the camp knowing the consequences: the torture and death of many of his fellow prisoners, one of whom is Kolbe. 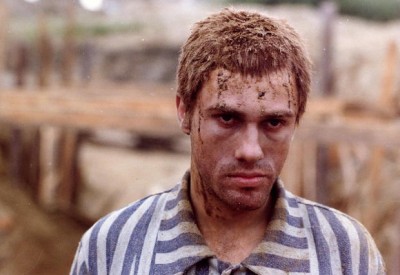 The movie deals with the profundity and incomprehensibility of Kolbe laying down his life for another in such a hell as Auschwitz. The movie ponders the question of whether or not such a love is possible. Most the characters assume it is not, taking the supposedly “realistic” view that Auschwitz was proof that man and nature are red in tooth and claw. In fact, Jan justifies his escape knowing that most people would have done the same in the face of such violence. However, the witness of Kolbe, who takes the violence on himself and transforms it into an act of love, makes all the characters speechless, helping them see the love at the heart of the world. In fact, it haunts Jan to the point of him repressing it with anti-anxiety pills. But this does not help. (Spoiler) The movie ends with Jan, close to forty years removed from Auschwitz, turning on the T.V. with the broadcast of Kolbe’s beatification showing. He quickly reacts by chugging some anti-anxiety pills. However, the witness of Kolbe so overwhelms him that he gives up his resistance and gets on his knees, finally facing the truth. Yes, he escaped Auschwitz but he could not escape the love of Kolbe. Kolbe’s witness finally hits him like the D-Day invasion of grace Fr. Robert Barron often talks about, and it is beautiful. The movie brilliantly shows how the Nazis did not have the last word. Love is the last word, and Kolbe showed that to the entire world, but particularly to Jan. In fact, Kolbe laid down his life for Jan, and the only response Jan can give is one of kneeling thanks and surrender.

I recommend all the seminarians to watch this movie. It concretely shows them the mission of the priest. Here is the movie without English subtitles. You can purchase the movie here.